Some Thoughts on Ideal Theory (part 1)

I’ve recently found myself revisiting topics from Gaus’s Tyranny of the Ideal, which I’ve written about here. This is an area where recent literature has exploded. Instead of trying to do justice to the multitude of issues that have arisen in that literature, I’ll approach the topic idiosyncratically to order some of my thoughts.

In particular, I’ll look at the issue through the lens of a relatively simple metaphor. Like all metaphors, it obscures some issues and sheds light on others. I’ll leave it to the reader to judge the degree to which it succeeds, but I found worth thinking about.

Let us meet Mary, then, who enters into university as a fresher in a philosophy degree. Mary is given a handbook for her degree on the basis of which she plans which courses to pick. The handbook falls into two parts, one containing course descriptions and another describing the curriculum structure. Course descriptions delivers what it says on the tin: it describes each of the courses she can take. Assume for simplicity that each course can only be taken within a specific year—for example, there is first-year Logic, first-year Philosophy of Language, and second-year Metaphysics.

The first task that Mary faces is to rank all courses. Call this the evaluative task. Mary needs to decide whether she prefers Logic to Philosophy of Language, for example. She should also have a sense for what combination of courses she prefers to which other combinations, as she cannot take all the courses. (Technically, we can describe her task as that of forming a complete, transitive ranking over all courses, and all combinations of courses, and lotteries over combinations of courses. But I’ll leave all technical stuff aside in the following.)

We can now turn to the second part of the handbook, curriculum structure. Mary’s university, I assume, has quite rigid conditions in place regarding preconditions for certain courses. For example, Logic might be a precondition for taking Metaphysics. Given that you can only take Logic in your first year, you must take it then if you wish to go on to Metaphysics in your second year. When Mary learns the structure of her curriculum in this way, she learns the decision tree for the game she is playing. (“Game” is to be understood in the wide, game-theoretic sense.) I will call this the structuring task.

There is a third task, however, which is the most important one. This is the practical task of making a choice. Mary’s immediate task is to choose first-year courses, but it would be rational to also form a long-term plan for which courses to take later on, especially given the university’s rigid curriculum structure. Mary’s ability to solve the practical task in a well-informed way depends on her having first solved the evaluative and structural tasks: if she did not know how she evaluated any of the courses, she could only choose haphazardly; and if she did not know which courses enabled which others, her ability to choose well would also be severely impeded.

Assume, for example, that Mary prefers Philosophy of Language to Logic, and greatly prefers Metaphysics to both. Mary’s handbook, however, has some missing pages, and does not list how these courses connect. So Mary does not know whether, if she chose Philosophy of Language, she would still be able to study Metaphysics in her second year. Mary does not know whether the decision tree she is facing is the top or bottom one (or yet another form) depicted here. Clearly, which course she should choose in her first year differs across these two decision trees; she should choose Logic in the top one, and Philosophy of Language in the bottom one. 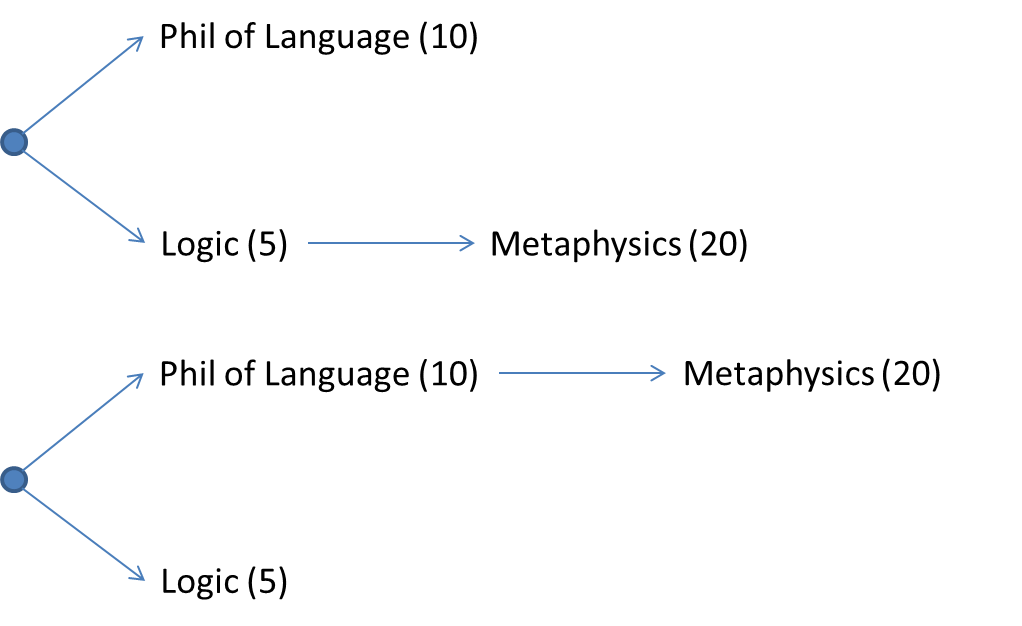 The upshot of this simple example is to clearly distinguish the three tasks, and to highlight that tackling the practical task relies on solving the other two. It is relatively straight-forward to read this back into political theorising. The evaluative task in political theory is the task of saying how different types of society should be assessed. (You might think that we should not be evaluating whole societies, but merely their political institutions. I’ll put that question aside.) The structuring task is one that political philosophers tend to generally ignore. Solving this task would require us to say which social circumstances allow which future social choices. Finally, there is the practical task. We face certain immediate political and social choices, just like Mary’s choice of first-year courses. But we will also wish to do some longer-term planning, deciding on a path of different social transformations over a longer time frame—just like Mary looking ahead at the choices in her second and third year.

It’s clear that, unlike Mary’s comparatively easy choice, solving the evaluative and structuring tasks for politics are immensely, if not inhumanly, difficult. Solving the first task would require us to have a complete moral-political theory; solving the second would require us to have a social-scientific theory that can predict all major social and political changes at least roughly. It’s clear that we have neither, and that developing either would require immense intellectual efforts. But let’s put this complication aside for now, as I first want to introduce some other ideas.

It’s now time to make a distinction between two ways in which Mary could be an idealist, or in which she could not be. I suspect that these two ways are often not distinguished clearly, so it pays off to be precise.

First, Mary could be an evaluative idealist. If Mary is an evaluative idealist, then she starts by imagining the perfect seminar—e.g., an engaging professor, interesting course materials, welcoming course atmosphere, practical exercises interspersed with lectures, and so on. In a second step, Mary then ranks all other courses by judging how close they come to this ideal—courses which are more similar to the ideal get ranked higher, courses which are more dissimilar get ranked lower. The analogy in political choice should be decently clear. The evaluative idealist starts by outlining the perfect society, and then ranks all other societies by their descriptive similarity to this ideal.

Evaluative idealism runs into a simple problem which has been powerfully described by Amartya Sen: the thing which is second-best might be extremely dissimilar to the thing which is best. For example, a mixture of 80% red and 20% white wine is more descriptively similar to red wine than white wine. Still, it seems, most people who think red wine best would rank white wine second-best, and the awkward mixture a distant third.

There are different ways one might try to answer this problem. First, one might suggest that similarity still works as a rough metric, even if it does not work very precisely. Second, one might reject various counterexamples by saying that they used the wrong notion of similarity—along a more relevant similarity dimension, one might argue, white wine is actually more similar to red wine than the mixture. Finally, one might turn to a multi-dimensional notion of similarity. Presumably, Mary has not merely identified the ideal course, but she has also identified the properties of the ideal course (instructor, content, size, etc.). On this basis, she can compare each particular course against the ideal course across these different dimensions. We can call this the property-identifying evaluative idealist. It seems plausible that most actual evaluative idealists fall into this category.

Let’s ask what the opposite of evaluative idealism would be. I will call it comparativism. The comparativist does not start from an account of the ideal course or the ideal society, but simply from a number of features that she wants in a course. She then ranks various courses according to the degree that they have these features. She probably has some thoughts how these different features rank against each other. The difference between the property-identifying evaluative idealist and the comparativist are slight. The only difference is whether you directly start from a list of the good-making features you want in a course, or whether you identify them through focus on a single ideal first. We get a hint here that the evaluative idealism/comparativism distinction might be anything but immediately obvious, and that the actual philosophical methods of these two approaches often converge considerably. Still, it seems that there is something in the distinction: if Mary is an idealist, she compares everything against the best; if she is a comparativist, she makes up a ranking “as she goes”.

So much for evaluative idealism. A second type of idealism concerns the method of practical decision-making. Roughly, Mary could shoot for the stars: her decision-making could be heavily based around trying to get to the very best courses. I’ll call this aspirationism, as it aspires to get to the best. Alternatively, Mary’s decision-making could be much more piece-meal: her main focus might be on choosing courses in the near future which she knows she’ll enjoy. Let’s call this incrementalism, because it is a method which focusses on the immediate steps before us.

Note that, in certain situations, which of these two attitudes Mary should take is rather obvious. First, if Mary has perfect information about the decision tree, and is fully certain about her preferences, then I assume that there’s one, and only one, best choice: roughly, whatever decision maximizes her utility over the course of her studies. If Mary faces the upper decision situation from figure 1, for example, then she ought to choose Logic, and it would be irrational for her to choose Philosophy of Language.

Assume, on the other hand, that Mary knows nothing whatsoever about curriculum structure, or that she feels deeply uncertain about her preferences regarding the courses in her second and third years. In that case, it strikes me that the most plausible method of decision-making for Mary is incrementalism: she should evaluate the courses she can take this year, and choose the one which looks most appealing.

There’s a lesson here which I will develop at greater length below: whether we should be aspirationists or incrementalists is really not a question we can resolve through a priori theorising; it depends on what information is available to us, and what specific problem we face. First, however, it’s important to highlight that the idealism/comparativism and aspirationism/incrementalism dimensions are to some degree independent. This can be seen if we consider an idealist incrementalist, and a comparative aspirationalist.

First, consider a case in which Mary is an idealist incrementalist. She compares all courses to her Platonic ideal of the good seminar, but her practical choice is focussed on her first-year options, and she doesn’t look (much) ahead in her choice. There are several reasons why she might do so. For example, she might be in a case we just sketched, where she does not know the curriculum structure. Alternatively, she might know it, but she might believe that her vision of the ideal seminar will have significantly changed after her first year. Second, we can imagine cases where Mary is a comparative aspirationalist. Mary really wants to take the best seminars her university have to offer, and her planning is focussed on that. However, this is not because she thinks of these courses in terms of some ideal; they are simply the courses which have come top in her ranking. Alternatively, we might think Mary to be very risk-friendly: she prefers lotteries with a chance for huge gains to comparatively safe options.

I suspect that, when we think about theories of justice, idealism and aspirationism are often taken to be a bundle (if they’re distinguished at all), as are comparativism and incrementalism. Certainly Sen seems to defend them both together. There does, indeed, seem to be a similarity in mind-set, insofar as the first two views focus on what is best, while the latter two do not. But there’s at least logical wiggle room here to combine the two, and those combinations do not strike me as particularly awkward.