Some Thoughts on Ideal Theory (part 2)

The issue of limited information has already cropped up, and now is the time to significantly expand on it. Assume that Mary has procrastinated badly in making a choice of courses. Now she finds that she has only one hour remaining to choose her first-year courses. Frantically, she opens her handbook for a last-ditch effort. (No actual student would make decisions this way, of course.)

There’s no way for Mary to read the entire handbook. She needs to focus, and she needs to be selective. She must draw up a strategy on which pieces of information she is to gather from the handbook. Should she prioritise reading up on first-year courses? On curriculum structure? On higher-year courses? Let’s also assume that Mary has not yet thought at all about what she expects from life at university. She has no considered principles or aims for her studies, and so no settled standards by which she can evaluate the courses before her. So in addition to determining which information she should collect from the handbook, she also needs to determine how much time she should spend – relatively to the information-gathering tasks – on developing her evaluative standards, on making her mind up on what she wants.

Put otherwise, Mary needs to decide on a strategy to divide her limited time between (i) forming evaluative standards, (ii) reading up on courses and applying her evaluative standards to those courses, and (iii) learning the curriculum structure. Call this the attention-dividing task. Then, for each of the areas she could pay attention to, she faces more specific tasks:

As Mary frantically works her way through her handbook, I assume that she will dynamically adapt her strategy. If a brief skim of her first-year options suggests, for example, that she is largely indifferent between them, she will likely broaden her evaluative attention, or shift her overall attention to the structural task. If she finds that evaluating courses turns out to be quite difficult, she might spend more time on the standard-forming task. If it turns out that her university is quite tolerant on how you structure your degree, she will pay less attention to the structural task – and so on.

Again, it seems to me that there is no principled answer we can give as to the right way to solve the attention-dividing task and the three more specific tasks: the devil is in the details. Someone who rigidly insisted (e.g.) that Mary’s evaluative focus should be narrow would strike us as odd.

Like Mary, I take it that we’re facing the attention-dividing task. More practically, this is a resource-dividing task: what kinds of research projects should be funded? What type of questions should philosophers ask, and which type of answers should be asked in their journals? I take it that these are questions that debates over “ideal” versus “non-ideal” theory ultimately are meant to have an impact on.

Again, we can divide resources across roughly the three tasks I’ve outlined. And for each of the tasks, we can then ask roughly the same questions that Mary has to ask herself:

As it is with Mary’s choice, I find it difficult to a priori think that any particular way of dividing our intellectual attention is the right way. Which method of dividing our attention is the correct one, and whether we should prefer aspirationism over incrementalism seems to me to depend, to a large degree, on what the empirical situation is that we face.

Consider, for example, the following four graphs, each representing a different search landscape, where colour represents the desirability of each particular node, and arrows represent which node connects to which. The first graph is connected in a highly ordered way and smooth: 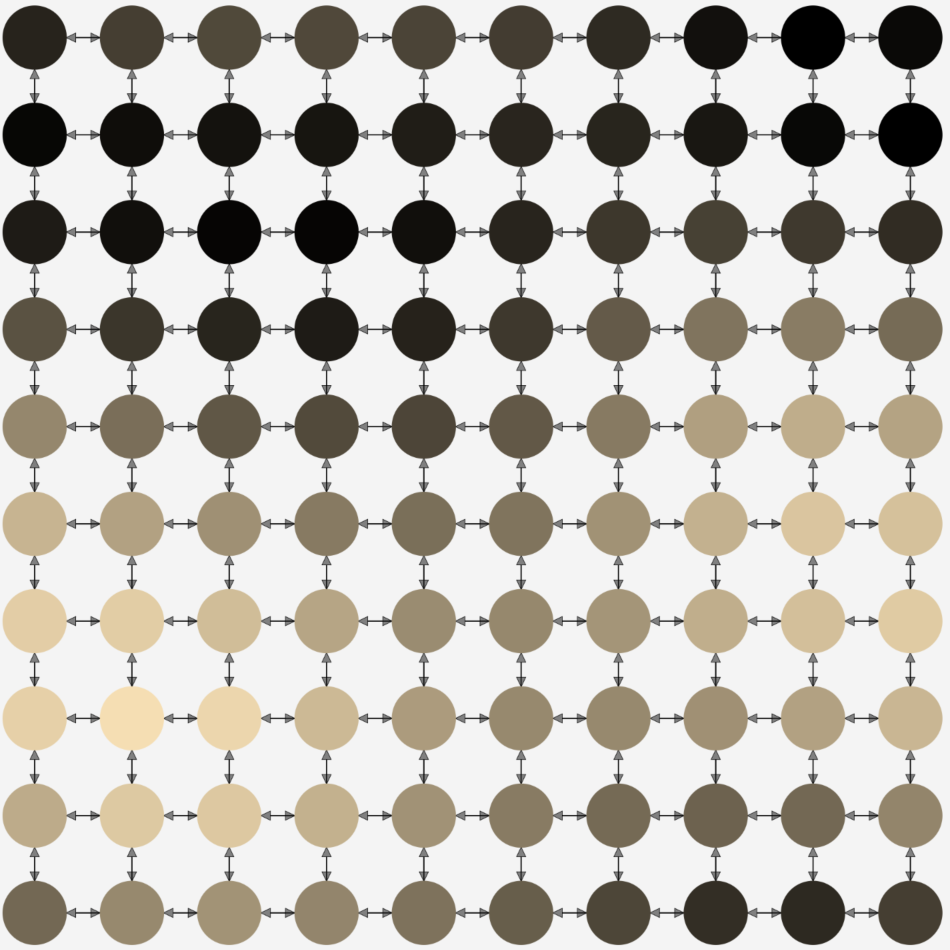 The second is highly ordered, but not smooth: 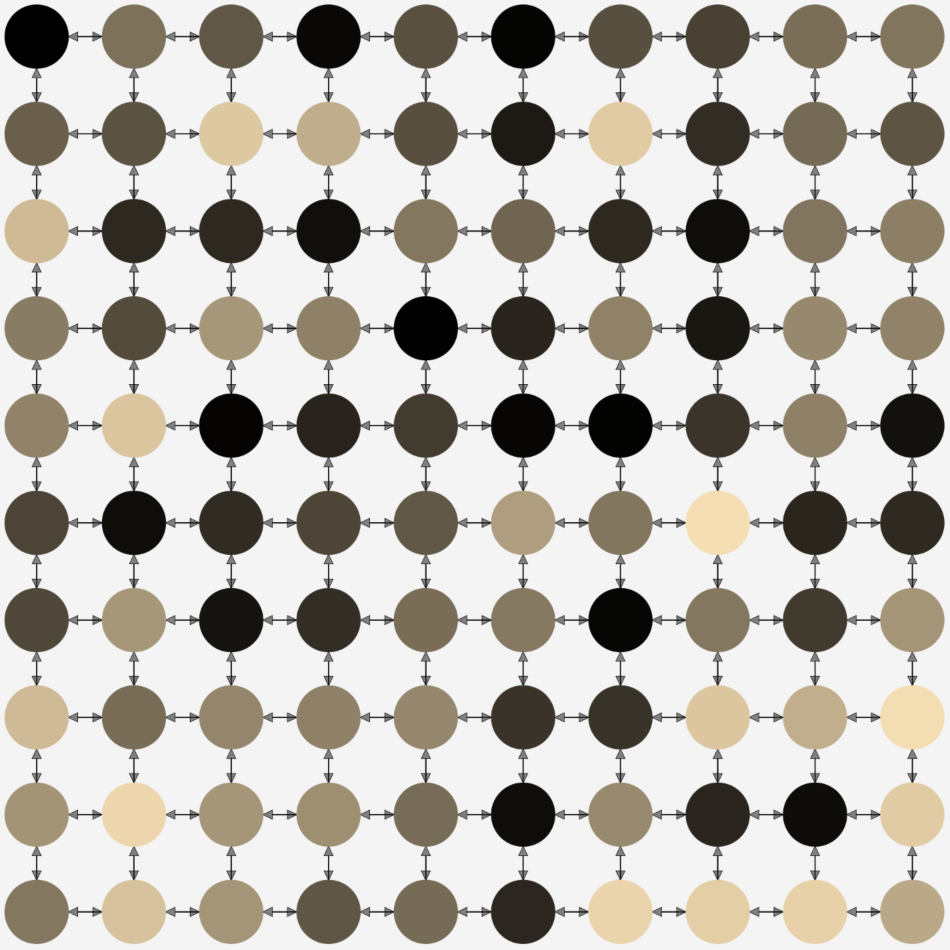 The third is smooth, but connected in a less ordered way: 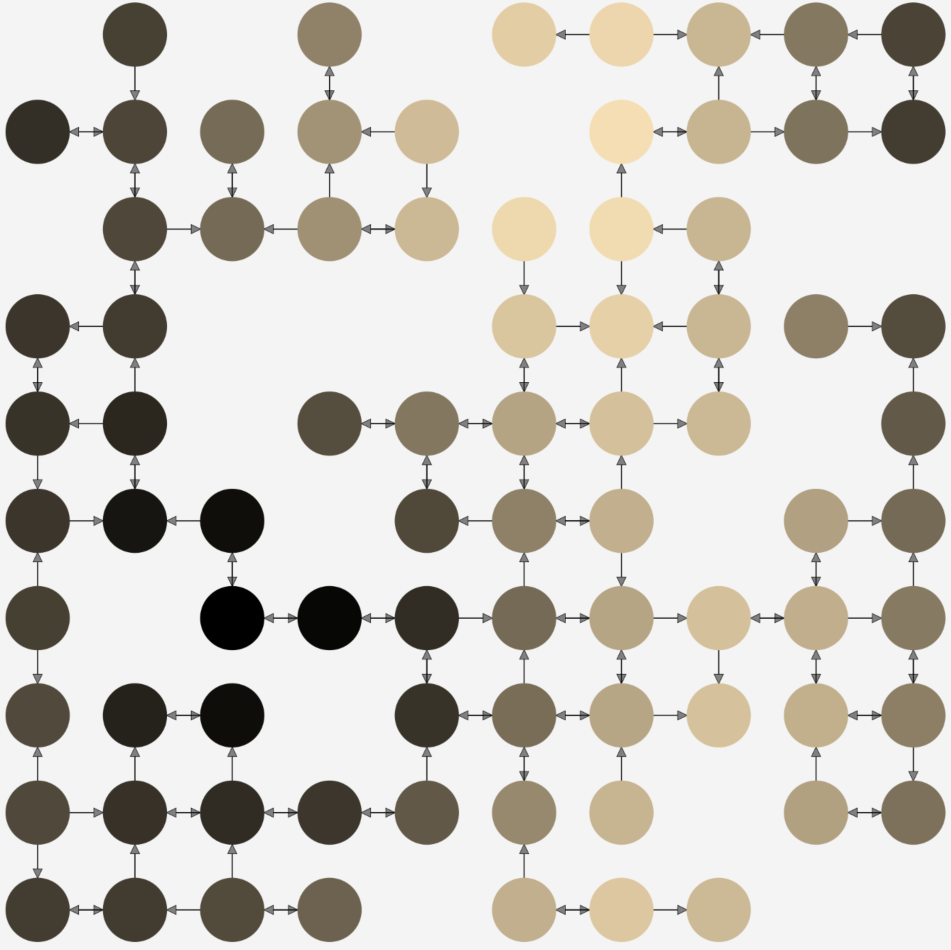 The fourth is highly chaotic, and also not smooth: 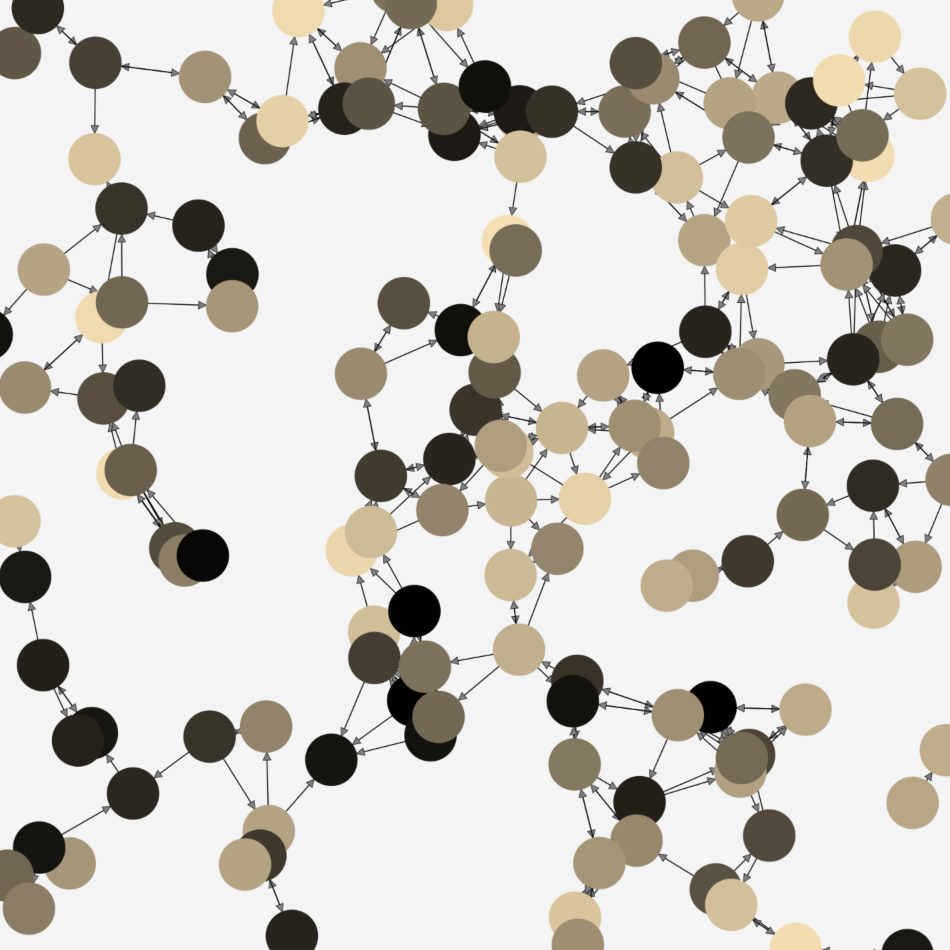 At least intuitively – though this would need to be shown through actual exercises in model-building, not arm-chair speculating! – which search algorithm we should prefer in these different scenarios will differ greatly. In highly ordered graphs, for example, we’ll need to pay less attention to structural information, as it’s easy to move back and forth. In less ordered graphs, we need to pay more information to potential paths, as we need to avoid dead ends, valleys, ridges, and other geographical features. In a smooth landscape, it seems intuitively easier to spread our evaluative attention far and wide, as the differences between our nearby options are negligible relative to the potential gains that could be had. And so on.

(As a side note, when it comes to discussing search optimization problems like these, philosophers will want to look at what other disciplines have to say about these problems. For example, a very successful class of search algorithms, simulated annealing, seems to be virtually ignored by philosophers.)

Implications for the Ideal/Non-Ideal Debate

The general upshot of this debate is that our answer to the various practical questions—but especially the various attention-dividing questions—depends on the specific geography of the problem we’re facing. So it would strike me as strange if our choice between aspirationist and incrementalist methods in political philosophy could be resolved in the pages of philosophy journals, on the basis of purely abstract arguments. It all depends on the (empirical) details.

In this specific sense, I’m on board with certain criticisms of political philosophy made by “non-ideal” theorists. Roughly, the critique goes, existing ways of doing political philosophy are too overly focussed on abstract, grandiose theorising that focusses too little on the historical realities of the here and now. Political philosophy, these critics argue, should be more incrementalist, its evaluative focus narrower, and much more attention should be paid to structural questions—i.e., questions of social feasibility, and social-scientific questions regarding possible social transformations.

The nugget of truth in this critique, I think, is that if aspirationists wish to defend the adequacy of their method, they need to defend it by showing that the aspirational method is superior, given the actual landscape of justice we’re facing. And making that case would require them to leave the ivory tower of abstract argument, which philosophers rarely do. Doing work of that kind is prime territory for theorists educated in PPE, the utility of which I’ve argued for here.

At the same time, the insistence on incrementalist, immediately useful work in political philosophy also needs to be defended empirically. Sometimes, Mary should be an aspirationist, and sometimes we think it would be rational for her to spend most of her attention on forming appropriate evaluative standards. It can be rational for her to focus on developing, and trying to live up to, aspirational ideals, rather than over-focussing on the menial details of choosing her first-year courses.

Note that the argument here presumes that our primary aim is of a practical nature. I’ve left it as an implicit assumption that we should distribute our intellectual attention insofar as it helps us to tackle the practical task—the task of making our societies more just. You might also simply reject this assumption, or at least mention that there are other values which it is worth seeking for philosophy—e.g., just pure knowledge of what justice requires. If that’s the case, you have reason to prioritise the standard-forming task over other tasks, even if it promises less practical value. But that’s another debate to be had.